Jessie Bryson shares her tips on taking travel photos – from interacting with locals to not sticking out in the crowd.

I was in Hampi, India, a landmark ancient civilization now noted for its perfectly decrepit ruins, just outside Hyderabad. I had been snapping shots of the ruins, but by the end of the day most of my documented work focused on my group of five friends I was traveling with. You can only take so many pictures of old stone things, after all.

But suddenly, from out of nowhere, and belonging to no one, a group of Indian children stood in front of me. I charged forward, camera on hip, finger already on the shutter release, poised for action. The kids came clamoring towards us like zombies. But before I could reach the piece of equipment to my eye, I had dozens of little hands already pointing for the lens. Zombie trajectory diverted. “Photo, photo, photo!” “Ma’am, one photo please!” I clicked away.

As I snapped a photo of one child, others would crowd in, inevitably making their way into the frame. Some feigned a smile, most others were straight-faced and stoic in front of the lens. But the moment I whipped around the viewfinder and presented them with their own digital reflection, their faces broke out into a wide grin. Shrieking with delight, they jumped up and down and demanded more. It was a photographer’s dream.

I wish all my travel experiences could be documented so easily. Wouldn’t it be amazing if that alligator in the Nile paused for a second and asked me to take its photo? Wouldn’t it be a breeze if the Hasidic Jewish community in Brooklyn stopped and demanded that I document their everyday life?

My newest home is Tanzania, where I’ve been for three months. That’s three months of people staring me down when I point a lens anywhere remotely close to their line of sight. At the largest market in town, where I’ve only been bold enough to take my camera with me once (more for fear of it getting snatched out of my hands than anything else), I pretty much ran away from a cigarette vendor who demanded I pay him for a photo I took. The photo wasn’t even of him…but, of course, I wasn’t prepared to engage in that confrontation.

So, I know very well that it’s not always possible to have an accommodating subject matter, especially when you’re shooting on the street. But what can you do when there aren’t dozens of tiny hands pulling you over, begging for you to take a photo?

Familiarize yourself with the location

Rather than take my camera out on the first outing in a new place, I’ll walk around and soak up my surroundings. It’s important to note how the locals respond to an outsider, to cameras, and it also provides a time to scope out some potential subjects or more hidden gems.

Spend more than a day in each location you’re looking to get some good images. I have spent 24-hour layovers where my memories are more of me crouching to get a perfect shot, more than enjoying the scenery. And I’ve heard horror stories of people visiting five cities on a seven-day trip. Travelling is meant to be enjoyable, not completely unmemorable and stressful.

Don’t be a tourist

At least, not if you’re trying to be a good travel photographer, too. Chances are if it’s milling with fanny-pack wearing camera-strapped tourists, there will be an image online that is ten times better than the one you take. My most treasured travel images happen during the little walks I take in between meals, on the way to these tourist spots.

You know, if I had purchased something from that cigarette vendor downtown, he probably might have obliged to have a photo taken. At the very least, he wouldn’t have snarled at me when I pointed my camera in his direction. I’ve also had great photographic opportunities when sitting down to eat at noodle stalls in Asia. If you’re a paying customer there, it gives you free rein to walk around and photograph some of their open-air kitchens. Same with spice markets in India, juice carts in Mexico, and bodegas in New York.

I don’t mean with your mom. Share it online, with the world. It will translate into something special to others, too. Despite claiming that I am a travel writer and photographer, I don’t always have my camera on me. And inevitably there are many many moments when I wish I did. I can’t tell you how many “perfect images” I’ve missed. But I have memories in place of a photo, and it just makes the shots that I do end up getting so much sweeter.

Jessie Bryson is an American travel and culture writer who has contributed to various online magazines such as EaterDC, Honest Cooking, eChinacities, and Girl Meets Food. She is currently based in Dar es Salaam, Tanzania, by way of Washington DC, Guangzhou, New York, Los Angeles, and San Francisco, with many detours in between. She kept a diary of her travel adventures, which she wishes included more island hopping, on her blog.

Did you know in some parts of Nepal photography is completely prohibited? Be prepared in order to get the most out of your trip.

10 Tips for Improving your Travel Photography

Professional photographer and winner of our 2009 Travel Photography Scholarship to Antarctica, Anna Zhu shares advice from her career. 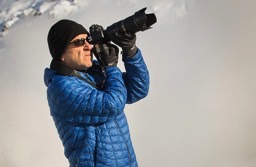 How to Pitch Your First Travel Photo Story

What makes a compelling pitch? What are editors looking for? Photographer Mark Edward Harris shares his advice to help get your work published.

You can buy at home or while traveling, and claim online from anywhere in the world. With 150+ adventure activities covered and 24/7 emergency assistance.